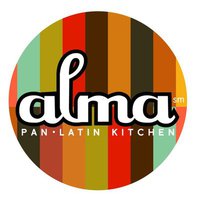 Alma Pan-Latin Kitchen is located on South Braddock and Forbes Avenue in Pittsburgh- one of the busiest intersections in the city. So, any restaurant should do well in that location, right? Well, Calli’s came and went in a matter of months, so keep your fingers crossed for Alma.

We arrived in the evening, around 7:3 PM0. Alma was half-full, and there were some patrons enjoying food on the patio. In addition to outside seating, there is ample seating inside Alma, probably 60 or 70 seats in all. There is main dining room, as well as another space just beyond the main seating section. The dining room has large, over-sized windows, and allows eaters an excellent view of Frick Park, as well as all of the action on Braddock Avenue. The walls are a deep red, and the wooden tables and chairs give it a warm feel. The back eating area has turquoise trims, and is quite dim.

My dinner companion and I looked over the menu, and the restaurant began to fill up. As customers sat and began talking, we noticed that it was becoming impossible to hear each other. The tiled floor and bare walls made for some serious sound-reverberation! Maybe some wall adornments as well as small area rugs would help dampen the acoustics.

Our drink orders was taken (no alcohol yet, but we were told the Alma cantina would soon be open), and we chose a few homemade limonadas, one of the house specials made with hand-squeezed limes. Our beverages were light, refreshing, and tart. Another drink option we were offered was a Chicha Morada; a traditional drink made from purple corn.

Before settling on our entrees, we asked for a serving of empanadas- a traditional Spanish dish made with homemade pastries, and filled with meat or vegetables. Our empanadas were stuffed with beef, topped with tomatillo sauce, and served with diced tomatoes and tomatillo sauce. The empanadas were delicious and hot, but were teeny; there were also only three little pastries. In a panic, I quickly started doing my empanada-math… two of us, but three empanadas…what should I do? I ended up cutting one in half- problem solved. 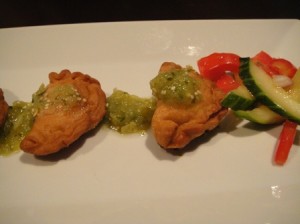 One of the entrée specials was a curried salmon with veggies and potatoes (which I ordered), and my dinner mate chose the skirt steak with rice and beans.

Our entrees came quickly, and I was pleasantly surprised at the size of my piece of fish. My salmon was cooked medium, and was delicious and rich. The spices and sweetness of the sauce made my mouth water. The potatoes were firm, but not overcooked, and had soaked up much of the sweet, delicious sauce. There was small marinated vegetable concoction on top that was equally as good- I tasted cumin, lime juice, maybe cinnamon… yum. 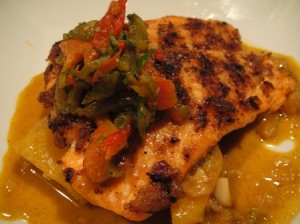 The skirt steak was equally as good. The portion was large; at least seven to eight ounces (restaurants usually serve five to six ounces of protein) and was seasoned perfectly. Although it was ordered medium-well, it came out more on the medium side, with some pink in the middle. The meat was deliciously tender, and bursting with flavor. Once again, there were hints of all those good spices. The rice and beans were a great accompaniment.

The food at Alma is very good. The dishes aren’t overcomplicated, and are carefully prepared. The service was prompt, and the restaurant itself is very clean and orderly. One thing- Alma isn’t cheap. We had one appetizer, two non-alcoholic drinks, and two entrees, and our bill was $60.00, $70.00 with a tip.

If you like slightly-spicy food with a creative flair, give Alma a try.