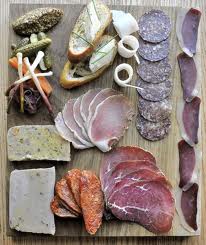 Cure Restaurant is described on its website as a “neighborhood restaurant with a small menu focused on local urban Mediterranean food.” I think it would be safe to expand that to include “while honoring every bit of the humble pig.” This is surprisingly good news for people who like to eat pork products. But perhaps not so great for the aforementioned humble pig.

I was surprised that a vegetarian friend recommended Cure. Pretty much everything on the menu screams “carnivores welcome”—there’s even a disembodied pig’s head on the restaurant’s wall. My veggie dining buddy likely believed that dishes such as gnocchi or linguine could be made meat-free. Unfortunately, substitutions are not permitted and she ended up with a salad that was attractive, but not particularly filling.

The meat eaters in the group had a much better experience. The salumi platter was an attractive display of lamb pepperoni, lardo, blackstrap ham, pork ciccioli, lomo, duck rillettes, chicken rillettes, finocchiona, mustards, pickles, and crostini.

When dinner arrived, the consensus was that the meals were nicely presented and flavorful, but very small for the somewhat large price. My Heritage Farms Chicken (now you’re wondering why I’d go to Cure and eat chicken, right? I actually seldom eat pork and never eat red meat) was cooked perfectly and served with a wonderfully complementary mustard sauce.

Others at the table had Gnocchi, Porchetta, and the appropriately named “That’s Why I’m Here,” which featured pretty much every part of a pig that you can imagine. I watched in interested horror as pigs’ ears and feet were consumed just inches away from a vegetarian salad. The porchetta was flavorful but a bit rare in spots.

The winner of the meal (for me, at least) was the chocolate soufflé cake. Served with a pistachio butter, the cake was a creamy, velvety, chocolate heaven—with a pinch of sea salt. Again, the consensus was that the portion size was rather small, but by that time we’d all partaken in the joy that is B.Y.O.B.—so any minor complaints were soon forgotten.

Cure is a small restaurant, and reservations are strongly recommended. Call to confirm because our reservation was somehow lost—but the staff worked quickly to accommodate our group. And because of the size and the number of people fit into the space, it can become rather loud and difficult to have a conversation.

When our meal was completed, we were politely advised that the next reservation for six had arrived—the implication being that we needed to wrap it up, ASAP. While this seemed somewhat reasonable given the extreme busy-ness of the restaurant, what wasn’t unreasonable is that the waitstaff had just opened a bottle of wine for our table, minutes before the request to skedaddle was made. We were left with the choice of chugging our (very nice) wine or leaving it behind. While Cure is B.Y.O.B, this seemed like reckless disregard for our Pinot Noir.

For meat lovers, Cure is a welcome addition to Pittsburgh’s dining scene. For chocolate lovers, its signature dessert may just become an obsession.