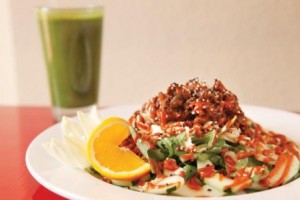 Within a mere week of the opening of Eden, I’d heard rumor of a mostly raw restaurant that catered well to the vegan appetite. It appears as though many of my vegan associates have found themselves hungry in what would otherwise be considering 5 star restaurants throughout the Steel City, just waiting for this kind of restaurant to open. I approached Eden in my usual guardedly optimistic fashion: “let’s look at the menu (on the door) first”, as I’d hate to be rude and leave after being seated. Once I saw that more than one item was prepared and bravely noted as vegan, I agreed, “I’m in.” When we entered, it wasn’t at first clear how the seating was decided but a precocious maître d’ offered that there were only deserts left. They’d had a wonderfully busy opening week and encouraged us to come for a full dinner another time. I was disappointed, but so serious about having more than one option to not be hungry, we returned a month later.

As we were seated, the same precocious server commented on the weather and said we had chosen wisely to sit indoors. The lighting was quite dark and the gentleman offered to read the items from the chalkboard for us. He had a love affair with his own words about the preparation of each raw ingredient at our table- it was entertaining. To this day, I am still uncertain whether I laughed at his impressive foodie-ness. Seriously, I think he is a major asset to the education of Pittsburgh’s restaurant goers, doing extensive research on the value of local and organic, dehydration methods and innovative uses of common ingredients. In fact, I thought he might be the owner, or the consultant chef –but no. Just a precocious and well-versed waiter who I might thank for making my decision easy by offering a $15 “taster” plate option to try bites of every raw item and dessert on the menu, which happened to be vegan. Yes, please.

We ordered a freshly juiced carrot, orange, ginger and apple drink and the peanut tempeh and kale hot dish to get the full experience. I set off to wash my hands, prior to eating, as I always do and was introduced to the world’s most awkward angled corner bathroom that exists in a public establishment. Not quite a Pittsburgh toilet mind you – because it was clean and visually private – but equally out of place in the swanky décor.

The tasters arrived shortly thereafter, meticulously presented complete with vegetable extract swirls and a sprinkling of seeds. The mouth feel of the bruschetta was alarming at first, since I had been trained to expect soft bread. Instead, the densely pressed “bread” was thin and crunchy like a hard cracker. The temperature of the raw tasters was also unheated, but the nutty pumpkin seed flavor added illusory warmth. The ruby red cakes had a noted beet flavor, but the ginger slaw stuffed avocado had me at the bright green color and fork-friendliness. These appetizers really started the mind, mouth connection.

I was giddy when the zucchini “bacon” strips, bacon strips, bacon strips arrived. I hadn’t eaten bacon more than twice in my life and it was at least 20 years ago. Yet I keep hearing about its recent trendiness and kinda wanted to know what all the hype was about. The zucchini delivered satisfactory crunch and saltiness, crested atop some mouth-watering creamy cashew mac and cheese. The General Tso’s had me furling my brow that I wasn’t tricked into eating meat, as the mushrooms were decidedly chewy and tangy. The sun-dried tomato sauce on the manicotti was unmatched, perfectly complimented with sunflower ricotta and delicate leaves of spinach. The peanut tempeh and kale dish was not included in the taster because it was hot, but we thought it would complement the tasters and wanted to see what a full dinner portion would be. It proved to be a substantial amount of moderately spiced food that required mindful chewing of small pieces, which is what I prefer in a dining experience.
Lastly, we took home the sweet and slightly sour flavor of vanilla ice cream cake in our mouths and hearts, feeling like we’d done the world a huge favor eating raw and local. Thank you Eden for bringing this experience to Pittsburgh. Our check seemed to be priced affordably at only $35.68, so we’ll be going back again soon – and bringing friends. 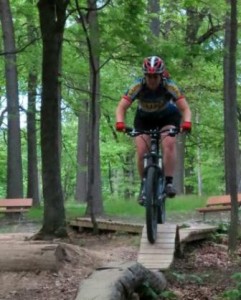