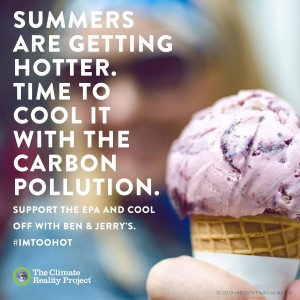 Climate change means out summers are getting too hot. So let’s cool
off. Next week, The Climate Reality Project is giving away free Ben &
Jerry’s in Pittsburg to raise awareness for climate action.

From July 29-31, the EPA will hear form the public on the proposed
Clean Power Plan ­ a rule that attempts to reduce carbon pollution from
power plants. One of the hearings will be in Pittsburgh.

These ice cream trucks will not only be handing out free scoops, but
also serve as climate action centers that will raise awareness and
gather support for climate action and the proposed EPA rule.

You can find the trucks on Wednesday, July 30 and Thursday, July 31
around the city of Pittsburgh.