Frozen treats are good, especially during the hot summer months. Sometimes I’m in the mood for a crushed-ice (like Rita’s), regular ice cream, or gelato. I have to admit, I’ve only had gelato a handful of times… it’s good, and much different than ice cream. 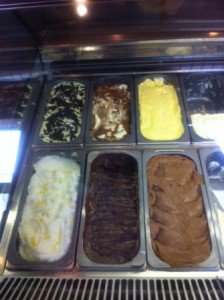 How does gelato differ from regular ice cream? Butterfat. Gelato has lower butterfat content, and is also churned a little slower, making it more dense than ice cream.

It had been some time since I enjoyed a cup of gelato, so while in Shadyside, I stopped into Mercurio’s on Walnut Street.

Gelato is usually served from rectangular stainless steel containers. There were many flavors to choose from at Mercurio’s; (fresh fruit choices looked especially good) I decided on chocolate. The dessert was served in small cup with a teeny spoon. My first bite was good- the flavors were intense, and the texture was smooth. The difference from regular ice cream was clear; it wasn’t as creamy.

Gelato is a traditional Italian dessert that is meant to be consumed in small portions. My gelato was excellent- prepared by ice cream artisans with great care. It’s slightly-less creamy texture could be the perfect finish to a delicious meal. Since butterfat runs through my veins in abundance, I’ll stick with ice cream.