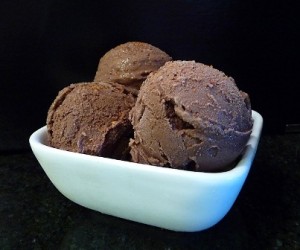 “Sweet and creamy with a back-kick of hot, this is truly unique. It doesn’t feel intuitive to combine the chili powder and cayenne pepper into this, but go for it. I promise it will be awesome.” – Noelle Giguere Badertscher

1 cup heavy cream (we used half and half)

10 – 11 ounces bittersweet chocolate melted (the better the quality, the richer the flavor) – we used 1 bag of Hershey’s special dark chocolate chips, melted in a double boiler.

Bring milk, coffee, chili powder, cayenne pepper, cinnamon, and vanilla extract to a simmer (about 180 degrees if you have a candy thermometer, just be careful is doesn’t boil). Meanwhile, combine egg yolks and sugar in the bowl with a wooden spoon until combined.

To temper the egg yolks: add the milk to the egg-yolk mixture in a slow but trickle-constant stream, whisking constantly until blended. Cook over low heat (again, careful not to boil), stirring constantly, until mixture is thick enough to coat the back of a spoon.

Remove from heat, pour into a bowl and immediately stir in cream. Set bowl in an ice bath. Whisk in melted chocolate until all is combined, and let chill.

Freeze in an ice-cream maker according to manufacturer’s instructions- store in an airtight plastic container in the freezer for at least an hour before serving.