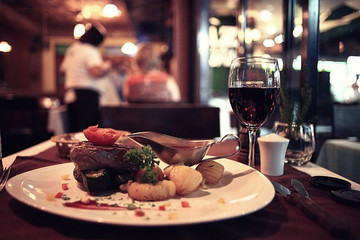 You’ve all thought it—“If I send this soup back because it’s cold my server is going to spit in it!”  Not true! In my 20+ years of working in the food service industry, I’ve never once seen anyone spit in food.    There are many myths that surround restaurant and their practices; some are true, while some are total fabrications.  Check out a few restaurant truths:

If you don’t eat your rolls or bread, they will probably be re-used for bread crumbs, croutons or bread pudding.

Sending back a steak to the kitchen because it isn’t well-done enough is a big mistake.  First of all, no self-respecting foodie would ever dream of ordering a steak past the temperature of Medium.  What happens to your poor steak is that it gets placed in the microwave for several minutes until resembles a small piece of coal or a meteorite.   Done enough for ya?

If you order a nice cut of steak, then ask for ketchup, you will be mocked; even after you leave.

All left-over trimmings from vegetables are used to make specials; most likely the soup of the day.  Left-over pieces of poultry, beef, and fish are also used to make these “mystery” concoctions.  If you’re ordering a seafood gumbo, most likely it contains scraps from all of the fish that has been butchered that day.   Beef Stew and Chicken-Pot Pie are also likely to contain less desirable pieces of meat.

There usually aren’t any seafood deliveries on Saturday or Sunday.  Avoid ordering “fresh” seafood dishes on Sunday and Monday during lunch.

Although specials are the Chef’s original recipes, they’re also often used as a way to get rid of aging food product in the coolers.  Let’s say Prime Rib was a special on Friday night.  If there is substantial rib left-over on Saturday, look out for the Prime Rib Sandwich special on Sunday.  Make sense?

If you order a good bottle of wine and choose not to take it with you, your server will be happy to drink it as he prepares your check.  No wine ever goes to waste in restaurants!

Pasta dishes have the highest profit-return for restaurants.  Six to eight ounces of pasta costs a buck or so (unless it’s truly fresh and made in-house).  Throw some sausage in, hot peppers, cream, and parmesan in and you have your evening special, costing the restaurant a total of $1.75 to produce, while charging the patron $15.00 or $16.00.

It’s really not a great idea to order fresh lemon with your glass of water or tea.  Most restaurants don’t wash their citrus before prepping it for the diner.  Bacteria and dirt love to hang out on the outside of lemons, limes, and oranges.  If you really want lemon ask your server if they have been washed before they were cut.

If you receive a seafood dish that smells fishy don’t eat it!  Send it back and order something other than seafood.   Properly stored and cooked seafood shouldn’t smell pungent.

If there’s something you really want but it’s not listed on the menu, ask for it anyway.  Chances are the ingredients are in-house somewhere and they can do it.  If the chef does accommodate you by making something special be sure to add an extra “thank you,” and an additional 10% to your server’s tip.

Please don’t ask to see the Chef to say hello on a Friday or Saturday night.  He’ll probably come out and say hello, but he’ll be pissed when he comes back into the kitchen.

Never come into a restaurant 15 minutes before it’s about to close with a large party.  The kitchen is in “pre-close” mode.  This means all of the cleaning has begun, the sauces are covered and put away, and the staff is tired and ready to go home.  Plan ahead!

If you really like something, and want the recipe, it’s ok to ask.  The server will probably ask for your e-mail address, but don’t expect anything immediately.  The Chef will get to you when he/she has the time.

Don’t order four courses and tell your server that you’re in a rush.  Chances are, he/she won’t even tell the Chef to put a rush on the order because it just makes the Chef mad.

Asking for your sauces, dressings, or vinaigrettes on the side is a no-no.  Dishes are designed specifically to be completed with these sauces, and ordering them on the side defeats the whole purpose.