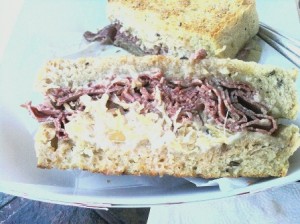 I was browsing Urbanspoon’s Talk of the Town List when I discovered Szmidt’s Old World Deli. I love a great deli, but I wondered what made this one so special.

The Atmosphere: When you enter Szmidt’s, it truly has the feel of and old world deli – it feels like it’s been there for ages. There is a traditional deli cooler, stocked with prepared dishes such as apricot glazed meatloaf, stuffed peppers, macaroni and cheese (a personal favorite) and deli salads. It is quaint, with minimal bar seating and two tables for two outside. I recommend calling ahead for take- out.

The Concept: We were greeted by the owner, Darren Smith, who realized that we weren’t his regular customers. Mr. Smith introduced himself and the concept behind Szmidt’s. Szmidt’s makes everything from scratch – including freshly baked bread, house brined and roasted meats, and homemade condiments and pierogies. On my second trip to Szmidt’s, I was lucky enough to get a tour of the kitchen – where I got to see pierogie dough and filling being freshly made.

The Menu: Szmidt’s has an impressive selection and there really is something for everyone. Even though I’m kind of a picky eater, there isn’t an item on this menu I wouldn’t be excited to try.

Szmidt’s offers szmidwiches, classic deli sandwiches with all homemade ingredients. My personal favorite is Szmidt’s take on the Rueben, dubbed the Sassano, with house baked rye piled high with house brined corned beef, swiss cheese, homemade kraut and 1000 island dressing. (If you dislike sauerkraut because you have only had the tastes-like-drinking-vinegar store-bought variety, I implore you to try Szmidt’s kraut.) 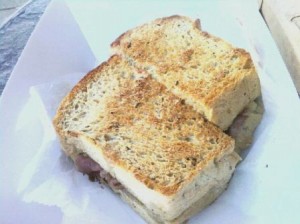 Szmidt’s offers classic old world pierogies (potato and cheddar, kraut, or jalapeno) and new world pierogies (Rueben, southwestern chicken, buffalo chicken cheese steak, bacon cheeseburger) with homemade dipping sauces. My favorite pierogies (so far) are the potato and jalapeno, the Rueben, and the southwestern chicken. My fiancé lives for the buffalo chicken pierogies. Szmidts also offers sandwiches with gigantic versions of pierogies, called “rages”; I have not been brave enough to try one yet. Finally, Szmidt’s offers sweet pierogies, pie by the slice, and brownies, but I never seem to have room for dessert. 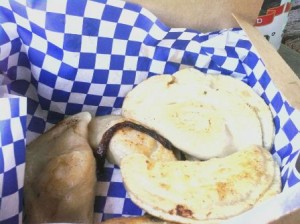 The Bottom Line: Szmidt’s is spectacular. Where else in Pittsburgh can you get a handcrafted sandwich where every element is made from scratch? Additionally, it’s a small business worth supporting. Not only is the food exceptional, but Mr. Smith is a humble, gracious person who truly wants to make his customers happy.