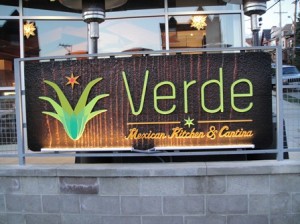 Pittsburgh has been lacking in the Mexican food department- until recently. A few semi-authentic restaurants have popped up in the city. One of these eateries is Verde, in East Liberty. If you’re coming from the east, simply drive down Penn Avenue until you see a colossal lime-green building.

The entire façade of Verde is glass. Two large garage doors (also glass) adorn the front of the building; I imagine they’ll be open during the summer months. 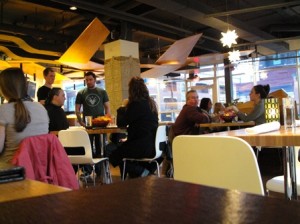 The inside of the restaurant is decorated in what I can best describe as a colorful Mexican/Spanish motif. There are large vibrant murals that look like original art, and the long bar is animated with bright, energetic lighting. 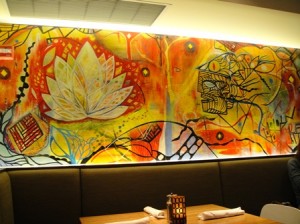 As we looked over our menus, our server dropped off some homemade corn chips drenched in salt-mmm. Our initial basked were dunked in green tomatillo sauce. Our second basket was served with a more traditional red salsa with onions, jalapeno peppers and tomatoes. There was a third salsa that was more of a red-sauce salsa; it was spicy and delicious. 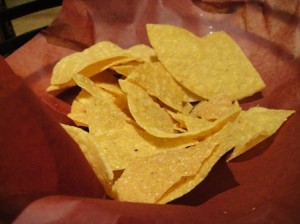 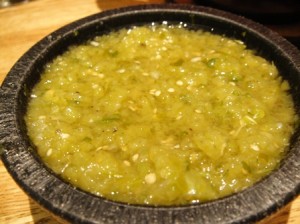 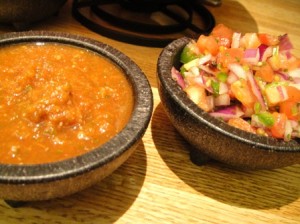 Verde has a huge selection of cervezas. Most impressive however, is their wall of tequila. I looked up at what appeared to be a few hundred bottles of imported tequila- it was beautiful. I asked the bartender if I could take a picture she replied, “Sure, if you have one shot of each of those tequilas…” That’s funny. 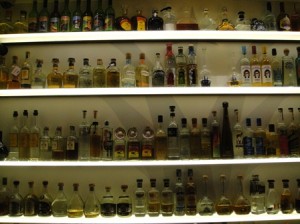 The Wall of Tequila 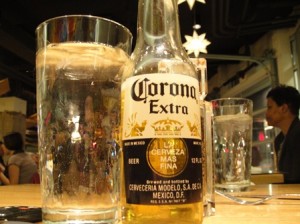 Besides beer and tequila, you can get margaritas, (I hear they’re amazing) sangria, mojitos, caipirinhas, and micheladas. Check out the Premiere Clase Margarita- it’s made with Herradura añejo tequila, Solerno blood orange, lime; it will set you back $14.00.

Verde also has a nice variety of Spanish wines.

My entrée came piping hot, and looked delectable. I chose the Carne Asada ($20.00) Grilled tequila-marinated steak, chimichurri, roasted, plantain-garlic mashed, and crispy onion. The meat was cooked medium-rare, and was tender and flavorful. The onion rings were crispy and seasoned, and the plaintain (banana) mashed potatoes were out of this world! 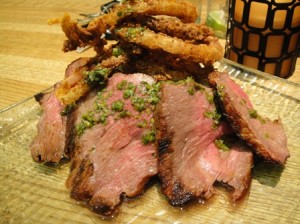 My guest had the Enchiladas De Pollo ($16.00) Smoked chicken, queso blanco, poblano crema. The enchiladas were made with corn tortillas, and stuffed with big chunks of roasted chicken. The poblano cream sauce was insanely good, and a perfect accompaniment to the spiciness of the dish. The most memorable part of the dish was the black beans and rice. 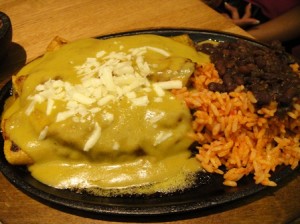 My dinner mate described the food this way, “Each item on the plate has its own distinguishable spice and flavor, perfectly paired to that particular ingredient…” Smart.

Verde is a great restaurant. It has authentic Mexican food prepared by a gifted chef. If you like tangy food, spices, and a hip atmosphere, put Verde on your list of “must visit” spots.

Reservations are recommended after 5pm.