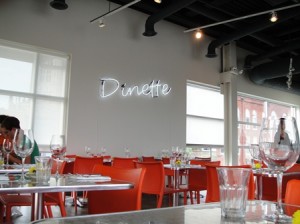 “How have you not heard of Dinette?”

My foodie dinner mates were surprised that I had never been to the restaurant in East Liberty. How could this be? I live for pizza, especially homemade, and Caesar salads are my favorite.

I arrived a few minutes early, and was taken to a seat by the window. The décor at Dinette might be described as modern, with the polished stainless steel tables and contemporary-styled orange chairs. It’s not a large establishment, and probably seats approximately 50 people; 15 or so extra in the summer with the outside tables. Large windows provide a view of Penn Circle. 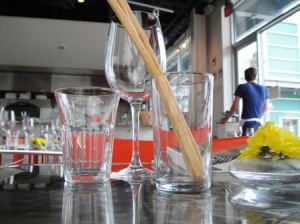 As I nibbled on a breadstick, I noticed the clean open-kitchen. You can watch as the dough for your pizzas are being hand-stretched, and thrown into the oven by the culinary staff.

My dinner companions arrived, and we began to look over the menu. The choices are few, but enough to accommodate any palate. There was a fresh Caesar salad (my favorite, remember?), Tabouleh with avocado and fresh mint (from the roof garden), Marinated Olives, Mixed Salami Plate, and a myriad of hand-made pizzas. I was told by my friends that the menu changes on a regular basis.

Dinette has an uncomplicated wine list. We sampled a Lebanese red which was fruity and delicious. There was also a nice selection of imported beers.
We started with Caesar salads. I love the furry little fish which are the main ingredient of these salads, so asked for a side of a few. Our server gave me a strange look, and said, “I can ask…” When she appeared with our salads, there were no extra anchovies. Apparently, providing the customer with a few extra fish (on the side) would have compromised the integrity of the dish. It’s always better to accommodate the customer. That being said, this was one of the best Caesar salads I had ever eaten. The romaine was perfectly ripe, green and slightly sweet. The dressing was tart, spicy, and had just enough anchovy taste and plenty of black pepper. The croutons with the highlight of the salad; roasted ciabatta bread seasoned perfectly, doused with olive oil, and not over-cooked. The shaved parmigiano-reggiano was strong; a perfect contrast to the natural sweetness of the leaves. 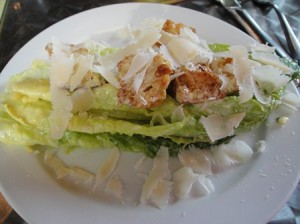 Pizzas were next. The pies served at Dinette aren’t huge- they’re enough for two, maybe three people. We opted for the prosciutto pizza with tomatoes, arugula and fresh mozzarella. We also ordered a garlic-scape pizza with frilled corn, peppered bacon, and mozzarella.

The crusts on the pies at Dinette are thin and crispy. Even better, the bottom of the crusts are crunchy as well- even with moist toppings. The prosciutto pizza was delicious. The combo of cured meat, fresh mozzarella and spicy arugula was intoxicating. The garlic-scape pie was delectable, with naturally sweet corn, peppered bacon and more fresh cheese. 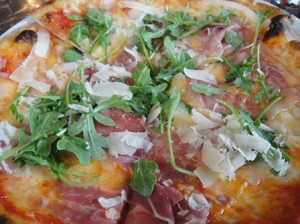 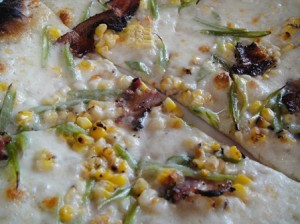 We ended our meals with a chocolate pot de crème. Our dessert arrived in a small ramekin- three to four ounces of chocolate bliss topped with fresh whipped cream. The dessert was perfect- not too sweet, and just the right amount of sweet to end a sensational meal.

Overall, the food being served at Dinette is some of the best I’ve had in the city.