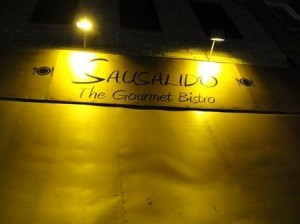 Sausalido is located in hip neighborhood of Bloomfield. On this Wednesday night (one day before Thanksgiving) the Italian district was bustling with hungry patrons, and people celebrating the end of the work week.

Sausalido isn’t large; it probably seats 50, and the décor is minimal. When we arrived at 7pm, there were a few other diners, and plenty of seating. Our waiter arrived promptly, and offered to open our bottle of Cabernet (Sausalido is BYOB). As he pulled the cork from our bottle, we asked for a plate of mussels and a Caesar salad with extra anchovies while we decided on our main dishes. 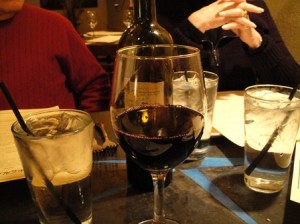 A small plate of bread and bean dip arrived with some crusty French bread. Our Cabernet was a nice accompaniment to the garlicky appetizer- yum.

Our mussels and Caesar salad arrived next. My salad was served in a small bowl, and the romaine, croutons and fresh anchovies where piled high. The lettuce was crisp and fresh; the Caesar dressing was tangy with just the right amount of garlic. 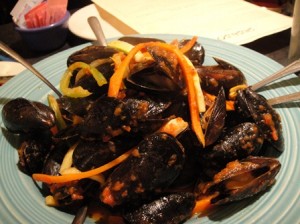 The mussels were served in a large bowl with a rich tomato broth and julienne zucchini. The mullusca were fresh and sweet, and salty. The tomato sauce was fresh, and was extra good on the crispy bread.

Entrée choices were: Salmon with ratatouille and pesto, double-cut pork with mashed potatoes, and crab cakes (split for two) served with risotto.

My salmon arrived piping hot. I was surprised at the size of my portion; it was at least 8 oz. and cooked a perfect medium- delicious. The basil pesto on top provided a beautiful color-contrast to the pinkness of the fish. The ratatouille had large chunks of carrots, mushrooms, tomatoes, and zucchini- the veggies weren’t over-cooked and added a nice texture contrast when eaten with the soft salmon. 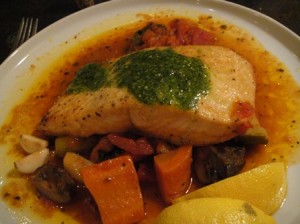 I had a chance to sample the crab cakes, and can say that the creamy risotto they were served with was some of the best I’ve ever had. 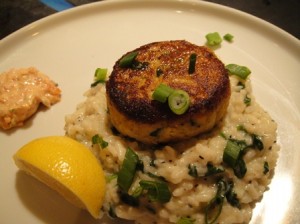 The huge pork chop (bone-in) looked awesome as well, and was quickly devoured by one of my dinner companions. 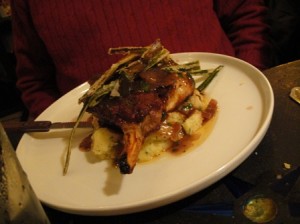 We seriously considered not getting dessert, but were glad we did. A large piece of pear and cinnamon cheesecake arrived at our table with four forks. It was served with fresh berries in a pool of crème anglaise. The cheesecake was dense, sweet, and rich- the pairs were deliciously fragrant. 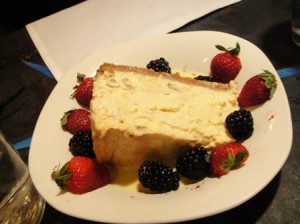 Cheesecake with Pears and Cinnamon

Sausalido can be described as contemporary European cuisine, but I’ll describe it as the one of the best restaurants in Pittsburgh that you haven’t discovered yet. The combination of perfectly executed food, exemplary service, and fun atmosphere will make this one restaurant you’ll want to return to.

One Response to Sausalido, Pittsburgh, PA