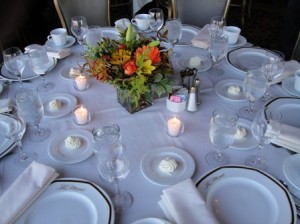 If you’re attending a weekend brunch Saturday or Sunday morning, don’t expect your server to be too lively. It’s likely that he/she was out the night before partying it up. Foodservice employees work hard, and often party as hard as they work- especially on the weekends.

Servers will often add certain items to your food to inflate the bill, thus increasing their tip average. For example, if you order a dinner salad your waiter may suggest some tasty shrimp or avocado. The same is true for mixed drinks. Instead of using house alcohol for a gin and tonic, your server may ask if you want to try a Sapphire or Tanqueray Gin and tonic increasing your drink price by $3-$4.00.

Your server may use the Sullivan Nod to entice you into ordering a pricey menu item. What is the Sullivan nod? It a sales techniques developed by restaurant critic, Jim Sullivan. Here’s how it works. During a specials rundown, your server nod slightly as they suggest a pricier item playing on your subconscious to agree to the costlier food.

If a piece of chicken, beef or other food item gets dropped in the kitchen, it’s most likely not going to get thrown in the trash. Instead, it will probably get run under some water, thrown back on the grill. Remember- keeping food cost down is the only way to make money in a restaurant.

If a restaurant closes its doors at 10 pm, kitchen breakdown usually occurs at least 30 minutes before that. If you want a good meal, prepared carefully, try not to come in a few minutes before closing- it just pisses off the kitchen and wait staff.

Most restaurants don’t recycle food. However, if there is untouched bread or butter it may be used to make bread crumbs, or bread pudding. Untouched butter can often find its way back to the cooler to be served again.

Vegetable and protein trimmings usually don’t get thrown away. That soup special you ordered is most likely the result of kitchen prep, and the stock is probably made from chicken or beef bones that are left over.

If you want to speak to the chef, try to do so during a non-peak time. If you ask your server to send the chef to your table on a Friday night at 8pm, it’s likely that he/she will show up with a really sharp knife.

Don’t order lemon with your water. Here’s why. Most restaurants don’t wash their fruit. Lemons, for example will pass through the hands of the harvesters, the warehouse employees, the delivery person, the kitchen personnel, and then your server. That’s five people that have their grubby hands on your lemons before they’re cut (unwashed) and put in your water.

If you have a suggestion for the Chef, and expect your server to forward it to the kitchen, it’s most likely not going to happen. If it’s busy, your server won’t have the time (or desire) to forward the information. If you really want to suggest a menu item, write it down and mail it. Most chefs want to accommodate their customers, and it’s more likely you will receive a response via snail-mail.

Servers work incredibly hard. Besides serving, they’re responsible for other duties like cleaning, re-stocking, and putting up with bonehead customers. A 15% tip is not standard, it’s actually the very least that should be left. If you were happy with the service, leave at least 20% or more. Don’t be cheap!