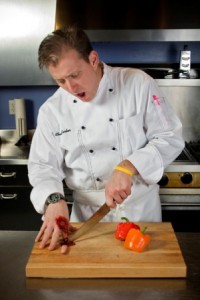 What does it take to become a chef? These days, it doesn’t seem like much. Every day I run into people that say they’re chefs, but I become skeptical when they tell me about their lack of experience. I’m continually hiring people that assure me that they can cook, but end up being skilled at only one thing; complaining.

Not only do these fresh-out-of school kids expect the world, they don’t want to have to work their way up the ladder, putting in the necessary time and effort to truly learn their profession. I hope I’m not dating myself by saying, “When I graduated from cooking school, things were different…you really had to prove yourself before you got promoted…” The truth is things are different. With the gaining popularity of The Food Newtwork, and other food-related shows, everyone wants to become a chef. What the TV industry doesn’t tell convey to these want-to-be cooks, is that it can take years of brutal work, studying, and personal sacrifice to become a successful chef.

If you’ve recently graduated from culinary school, and are working at your first job, you are not a chef, you’re a line cook. Actually, you’re probably not even a line cook; you’re most likely a prep-cook. You have a diploma, sure, but do you have the experience required to give yourself a title that implies you have the required skills, experience, and education that most chefs have? And most importantly, have you paid your dues? Probably not.

When I graduated from culinary school, and began working, I can recall being constantly reminded that I was barely a cook. I was slave, someone to that was to be used, abused, and overworked on as many occasions as possible. Nights, weekends, holidays…I worked them all. If someone got sick, I got the call. “Get here ASAP.” Absolutely chef, whatever you need. If someone spilled five gallons of grease in the cooler, I’d be happy to clean that up for you. The garbage is full? Have that new guy take it out, and while he’s outside, have him run to the 7-eleven and pick me up some smokes- does anyone else need anything? And PS, “I don’t have any cash, I’ll pay you back…eventually; you don’t have a problem with that do you?” Nope, I sure don’t.

The first kitchen that I worked in after school was full of seasoned professionals; all proficient, and skilled at their craft. They had all been cooking for years, and didn’t care what I could, or couldn’t do. I started on the salad station- the lowest position in the kitchen, and was responsible for making the dressings, specialty, as well as regular house salads, and plating desserts. Another cook trained me- he was being promoted to the appetizers and sauté station, and was glad to be moving up the ladder. He didn’t care who I was, or where I was from- he just wanted to make sure that I was properly trained, and could get the food out…fast. It was also made clear that I wasn’t to ask for help or assistance; if I couldn’t handle it, there were 20 more culinary graduates that would gladly work for peanuts.

My first night we did over 300 covers. I kept up for the most part, but found out hallway through my shift that I needed to cut more lettuce. In between orders, I would run to the prep kitchen and cut romaine, made additional dressings, and pull desserts from the walk-in. When the orders began coming in, and it was time to dress the salads, I would pick up a ladle only to find the handle had been placed over a flame so that would scorch my hand. Apparently, this was done to all of the newbies; a can you handle it test. On one occasion, the Executive Chef walked by, saw my burns, and simply laughed. “Looks like they got you pretty good tonight,” he said. Yeah, I thought to myself, they sure did, and thanks for nothing. Throughout the evening, I had to leave the line to re-stock my station, and returned to the line, I would have to use my side-towel to pick up my dressing ladles to avoid further damage to my hands.

Besides the torture that I endured on the line, there were also end of the evening duties.

“See those drain covers? Well, the gray sludge that has been building up for the past few weeks needs to be cleaned out… the best way to remove the filth is to use your finger, but I recommend you put a glove on first.”

“Hose down the mats, and spray the hoods with these chemicals, but be sure not to get them in your eyes, or you may just go blind…”

Mop, clean, repeat. This went on for an entire year, until I finally had proven to the chef, and line cooks that I had the required toughness, attitude, and fortitude to be on the line.

Our broiler cook quit to be Sous Chef at a new steakhouse in town, so everyone on the line got moved around, and I was promoted to the appetizer and sauté station. Finally.

The next week I began training a recent culinary graduate. I showed him how to make the dressings, plate the salads and desserts, and prepare for busy nights. I didn’t warn him of the impending bodily injury that he was about to experience- this would have been frowned upon.

His first night by himself, newbie ran out of salad mix, just like I had many times. He ran to the prep kitchen to cut more lettuce, and as he did, two of the line cooks put his ladles over a flame while another stole his chef’s knife. The poor kid was quickly in the weeds, as he wandered around the kitchen looking for bandages for his burns, and a new knife to cut his desserts.

Congratulations for my promotion came in the form of a pie to the face with such force that it bloodied my nose. None of cooks apologized for the assault; the just laughed and continued to cook. I didn’t care, I was finally part of the team, and it only took a year.

I was the second person to leave the kitchen that night. I watched as newbie sprayed down the hoods. The chemicals would burn his hands and face just as they did mine; who knows if he would be willing or able to put up with the humiliation and punishment on the line- I hoped he did, because in the end, it was worth it.