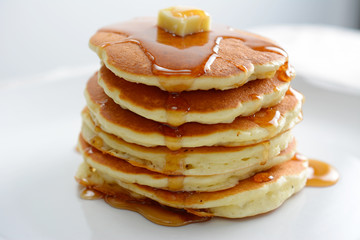 We’ve all had a bad dining experience at one point or another.  Maybe it was the bad food or the inattentive server or the annoying atmosphere…or the lethal combination of all three.  There is a point in any restaurant adventure when you settle in. “Oh, man, this place is great,” you might say.  Unfortunately, sometimes that’s not the case and you’re left with “Uhh…seriously?”  It’s disappointing because yes, it’s a waste of time and money.  But it’s also a waste of ENTHUSIASM.  I don’t know about you guys, but I really look forward to going out to eat (hence this blog).  Anyone who has ever seen me with a box of DiCarlo’s pizza knows I can get pretty excited about food.  So what happens when all of your resources and expectations finally come together for a nice meal and it just doesn’t work out?

Pamela’s Diner is one of the most famous restaurants in Pittsburgh.  There are six locations, and last weekend I finally made it to the one on Walnut Street.  I’ve heard so much praise for this neighborhood breakfast nook  since I’ve lived here.  Take a drive down Forbes or Walnut on a Sunday morning and you will see people literally lined up down the street, even in January.  Pam’s is so famous, in fact, that President Obama visited the diner & then requested Pamela’s pancakes at a White House function this past May; those are some famous flapjacks.

I was ready for a mind-blowingly awesome, turning-point-in-my-life kind of breakfast.

What I got was decidedly less than mind-blowing, without even a whisper of awesome.

Ryan and I arrived early to beat the rush.  (Sidenote:  Pamela’s is CASH ONLY.  Thankfully I saw the sign when I walked in, so I had to run back down the street to a nearby ATM, that could have cost us a table.)  Anyway, there were a few tables open at that point, so the hostess told us to take a seat wherever we’d like.  There was a table for two by the front door (nah…too cold) and a couple of open tables inside the restaurant.  We chose a table happily, and we didn’t have to wait in line!  Let’s do this!  We ordered a couple of coffees and scanned the menu.
I guess this is where I should mention that there were two hostesses working the door at Pamela’s that day, and both of them were wearing headsets.  Presumably the headsets would make it easier to direct patrons to available tables, you know, rather than running back and forth all morning.  Anyway, so when one of the headset ladies came over and asked us “…that’s where you’re sitting?”,  I guessed that the other headset lady hadn’t filled her in on the whole “sit wherever you want” thing.  “But it’s a four-seater.”  Ugh.  Seriously?  Are they really going to move us after we’ve been here for ten minutes? (They didn’t.)  That was when I realized that Pamela’s operates on a very “head ’em up, move ’em out” mentality. Herd the cattle in, feed them, and send them back out to pasture. I understand that is how restaurants work, I just don’t like it when it is so obvious-it was very uncomfortable.

I ordered the vegetarian omelette and some wheat toast. As we were waiting for our breakfast, the dining room filled up. All of a sudden, Pamela’s was crazy-busy…at least 30 people were waiting for tables to open up; 30 cold, hungry people. I think I made eye contact with an Indian man waiting in the doorway as the server was dropping off our food. Awwkkwwarrd.

I was surprised to find a side of home fries next to my omelette. (Don’t you usually get a choice? Hash browns? Fruit cup?) Thank goodness I’m a fan of onions because those ‘taters were covered in them. What if I hated onions? Anyway, I dug in to the omelette. Green peppers, mushrooms, tomatos, and cheddar cheese…how could I go wrong? Texture, that’s how. The veggies were undercooked, hard and flavorless. Cold veggies nestled is a rubbery mattress of egg & cheese. I ended up using ketchup & Red Hot to spice my breakfast up, but I still couldn’t finish it. It wasn’t very good.

The whole meal only took about 30 minutes, but apparently that wasn’t fast enough. The waitress dropped the check off at our table and by the time we walked the six feet across the room to the cash register to pay, the head-set ladies already had our table cleared and a party (of four) seated at our table. We had to track the waitress down to give the tip to her personally. I didn’t mind that so much, though, because she was a fantastic server. (Thank you!)

I think I would have been more inclined to forgive the hostesses for being so impatient, if only the food had lived up to the hype. After this particular breakfast, I walked away thinking that maybe I shouldn’t test Pittsburgh’s mythology. If people want to think that they’ve got something special in Pamela’s (or Primanti’s or LeMont), maybe it’s better to let that be. What do you think?

2 Responses to Pamelas Restaurant In Shadyside