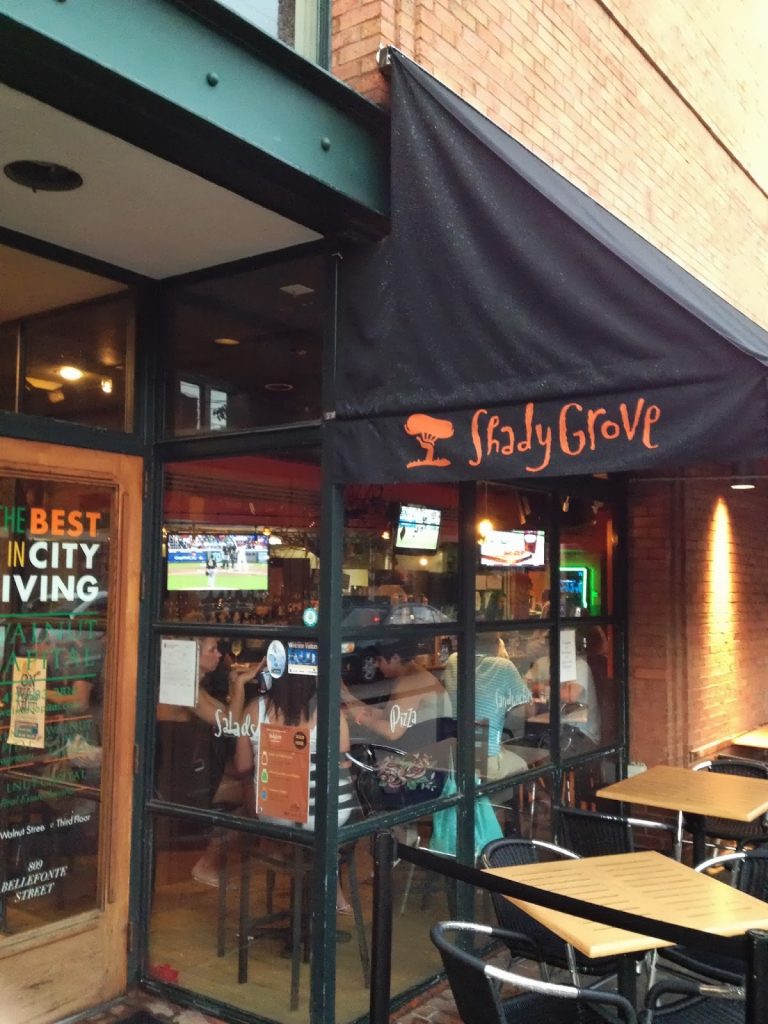 You know it’s going to be a long week when it’s Monday night and already you are too lazy to cook.  Luckily, I’ve got this sweet new gig that allows me to justify going out to dinner pretty much whenever I please (and can afford it)!   On this creepy fall evening, I decided to head to Walnut Street in Shadyside.  We wanted some “low-key” good, ol’ American food.  We headed to Shady Grove.

Shady Grove is actually the downstairs sibling of the Walnut Grill/Shady Grove pair, and I gotta say, they definitely got the “grove” thing down pat.  The dining room is a long, narrow space with sparse lighting.  There were about 6 lights in the dining area, and in fact, I think most of the light in the room came either from the large garage door windows or the large  TVs hanging above the bar.  The dim lighting was actually pretty annoying; I like to SEE what I’m eating- too grove-y for me.

Looking around, I noticed that the diners were mostly twenty-something kids, on dates or in groups. There were a few …um…mature adults enjoying wine with dinner in the back of the room.  I have a tendency to notice the background music at restaurants.  No doubt about it, music plays a big part in setting the “vibe” of the place.  I suppose that’s why I was a little bit confused when the Fresh Prince of Bel-Air theme- song came on; really, Shady Grove…the Fresh Prince song??  I mean, sure I loved that show when I was eleven, but in 2009?  At dinner?!  I wanted to throw that song out the front door like Uncle Phil did to Jazzy Jeff.

The bar boasted a couple of specials that night: half-priced margaritas and half-priced draft beers.  I noticed that the Martini list wasn’t much of a martini list at all, but really just a list of various Three Olives brand flavored vodkas mixed with pomegranate juice…not very inventive.  My roommate and I started with classic margaritas, but they were AWFUL, nothing more than terrible sweet & sour mix & ice.   The waitress was pretty cool about us sending those drinks back, and we ordered new libations.  Brianna (the roommate) ordered something called a “Posmo,” and said it was “much better” than the margarita.  (I think that’s a cosmopolitan with pomegranate juice instead of cranberry.  Fun!)  My pal Emily enjoyed her “Pomenade.”  I just had a Yuengling draft, as I wasn’t in the mood for a pomegranate drink and the bar was out of the other beer I tried to order (Southern Tier Brewing Company’s Pumking…Mmm).  In Shady Grove’s defense, it is the end of the fall beer season, so I guess I can understand running out.

In fact, Shady Grove was out of several menu items that night, and I was pretty annoyed that the waitress didn’t tell us that up front.  I was looking forward to trying something called the Eggplant Tower; it was listed as a “Shady Signature” dish.  Too bad…they were out of eggplant.  No beer.  No eggplant.   I know it was just bad timing, but sheesh!

Eventually, we had a nice heap of grilled chicken nachos sitting on our table.   The nachos were actually a great size for three hungry ladies to share.  I was happy to see an abundance of jalapenos (that way we didn’t have to ration peppers; we all love hot food!)  Unfortunately, the rest of the dinner didn’t quite live up to the prelude.  We shared a veggie white pizza, and we agreed that it was actually pretty gross.  There was no taste in the crust, there was no taste to the sauce (if it even had sauce on it), and the veggies did not mesh together well.  We should have skipped the pizza altogether.

I will say that I had intense food envy when the table next to ours was given a huge platter of hot wings.  I love hot wings…why didn’t I just get the hot wings?  Stupid trendy menu.  Stupid vegetables.

I get the impression that this is a bar that specializes in bar food.  I appreciate that Shady Grove is trying to spice things up with some adventurous drinks and dishes (what the heck is guapo, anyway?).  Unfortunately, it got away from them somewhere, and the special dishes have turned in to a waste of money.  This is a neighborhood hang-out.  Big aspirations are great, but in the end, Shady Grove is just like any other bar: kids in hoodies, eating wings & watching Sportscenter.

So…did I mention that I love hot wings?  I’d like to do a Best of Pittsburgh Hot Wings feature.  Sometime soon, I will head back to Shady Grove to try out their beautiful buffalo wings.  If you have any suggestions for restaurants with awesome hot wings, let me know!  I’d love to find the best wings in the ‘burgh!  I ain’t chicken!