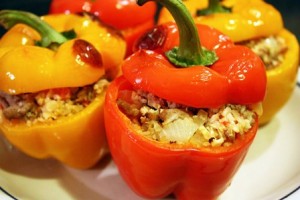 For a long time I’ve been wanting to try the meat-less ground “meat” that is now widely available in brands such as MorningStar Farms, Boca, etc., but I have to admit, being raised eating nothing but ground beef, I was a little skeptical. However, I will typically try everything once, so I figured I’d give it a go. I thought long and hard (for about two minutes) about what I would like to swap the ground “meat” for. I never really did like beef tacos, so that option was quickly dismissed. Hamburger Helper just seemed wrong. Mock “Bolognese” pasta sauce? My dad, the Italian, homemade gravy maker, would kill me. I decided on something that was closer to the vegetable family, as to lessen the blow on typical meat-heavy dishes, and went with a stuffed pepper recipe. “Can’t be that bad, most of it is rice any way,” I thought. But what could I do to spice it up? I love taking traditional comfort foods and making them both healthier and feistier. Plus, I’m not a huge fan of bell peppers, so I definitely needed an ingredient that would steal the show. Ah ha.. the secret weapon: Curry. Hopefully those of you strongly against Indian food don’t read this and start running for the hills. You can really swap in any spice you’d like (Cumin, Chile) or nothing at all. After-all, I do realize there are folks out there who genuinely don’t like spicy food. Mind boggling to me, but I get it. Here goes nothing!

4 large bell peppers (any color – red make for the most flavorful, in my opinion), tops, seeds and core removed 1 package Boca meatless crumbles

Salt and pepper to taste

Boil peppers in large pot for about 3 minutes. Set aside.

Heat oil in a large skillet over medium heat. Add onions and garlic and cook until onions are golden-brown. Add meatless crumbles and cooked rice and stir until mixed evenly. Stir in curry and salt and pepper. Cover over low heat for 3-4 minutes, stirring occasionally. When finished, remove from heat. Fill 9×9 baking dish with 1/2 inch of water and arrange peppers with the cored side up. Use a spoon to fill each pepper to the top (it’s okay if it goes a little over). Cover dish with aluminum foil and bake for 30 minutes. Peppers should be tender when finished. For crunchier peppers, bake for 20-25 minuets.

Remove from oven and serve alongside your favorite salad or soup! 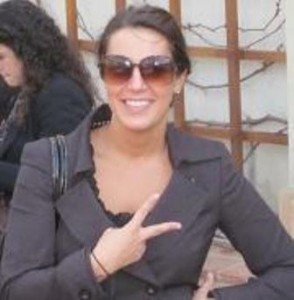